I've got nothing to say other than that I'm awesome. You know who else is awesome? You are. I'm really curious how many of my friends still use Livejournal. Say hi if you do. :) 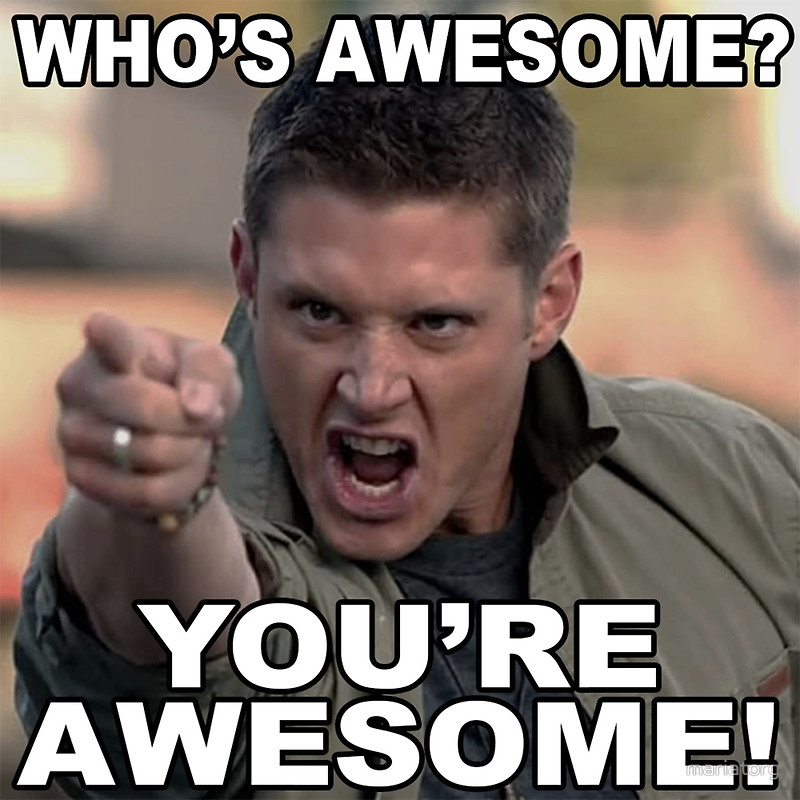 First off I know this is old news but I'm going to talk about mildly spoilery stuff. (See I still have manners)

Nothing much going on. Working overnight at the hotel Wednesday and Thursday night so I may or may not wake up and eat food for Thanksgiving.

But in the meantime I've got a flood of spam comments on my journal. If I'm going to get tons of spam comments it should at least be from friends so please give me your best impression of a Russian LJ spammer.

So Athena begged me to let her stay up a little later to do her chores on Thursday. I hated to discourage such eagerness to do chores so I let her. :) She got everything done except put her clean clothes away and wash the dishes. She finished those tonight. All so she could get her allowance and spend it on a toy. She's had a chore list to do if she wanted allowance but I don't think it really clicked until this week. I've been telling her every time she asks for a toy or something that if she had the money she could buy it but that I wasn't going to buy it for her. And she saw a toy she wanted that was 4.50 on clearance so she got the job done. While we were at the store I told her I would buy her a wallet to keep her money in since she was just walking around with a fist full of dollar bills. lol. She spent about 30 minutes "trying to make the right decision" on which one to buy. It alternated between a panda wallet, a Yoshi wallet, a Mario Brothers wallet and this glittery pink cheetah looking print. I was really sad she didn't even consider the Batgirl wallet. She tried to escalate it to getting a wallet and a purse since it matched and she can't just carry a wallet!?!? And she can use it when she's a grown up. It was just so cute to see her putting so much thought into which purse/wallet to buy.

In store news the new Magic the Gathering set Return to Ravnica came out today and it sold very very well. Between that and some other big sales we actually did an entire weeks worth of sales...twice...in one day. It's crazy. Also in store news I may have to fire some employees. I send out a weekly email and at the end I ask a question that requires a response so I know the email was read. I actually had 2 employees say they didn't know either of the people in my question. The question was: "Who would win in a fight between Ash from Army of Darkness and Snake Plissken from Escape From New York?" TWO PEOPLE THAT WORK IN A COMIC/GAME STORE DIDN'T KNOW OF EITHER OF THOSE PEOPLE! THE APOCAGEDDON IS UPON US! I have to fire them right?

PS: If you don't know who either of those people are please Wikipedia them or something and lie to me. I don't think I could take it otherwise.

I am going to try and post something here every couple of days at least. I'm not really sure who of my online friends actually uses LJ anymore so please say hi. :)

My birthday was recently back on September 26th. I had Athena that night so I decided to put off my birthday fun until this past Monday since Athena stays with her mom on Sunday and Monday. I went to Red Lobster's all you can eat shrimp and ate all I could eat. *Sigh* I'm getting hungry just thinking about it. Mmmm...shrimp.

Afterward we met up back at my store and we played some games. I really wanted to get some social interaction in since I've been pretty much 100% work or taking caring of Athena since her mom and I split. I miss other adults. We played some Star Wars X-Wing and I was running some tie fighters. Another guy was playing some tie fighters as well and the only rebel player was a guy playing Luke Skywalker's x-wing. After a small friendly fire incident we decided the glory of the Empire was a better goal and blew Luke out of the sky.

But the real highlight of the gaming portion of my night was Fortune & Glory from Flying Frog Games. The best way to describe this game is to think of Indiana Jones as a board game. Except don't think of that stupid crystal skull one. Please. Don't. We had 8 players and after much accidental cheating we finally figured out how to play since nobody knew. It was awesome. Some highlights of that game were me getting killed by a Nazi tank filled with gold, one of the players got killed by failing a test to avoid eating a "found sandwich" that was henceforth dubbed the broodwich. The sandwich made multiple appearances and was pretty deadly. One of the dangers to beat was a faulty cargo plane that if you failed your check it would crash. I don't know how the pilot kept getting jobs...he crashed so many planes. I really can't describe accurately how much fun this game is. It pretty much has all the pulp elements you love in a game. The goal is to win gold, usually by searching the globe for artifacts and selling them or raiding the Nazi zeppelin that flys around the board pooping out Nazi soldiers to fight you. If you've got some time to kill and you're a fan of Indiana Jones or good board games check it out.

Today I got back to the grind though. I found out that Athena got her yellow belt taken away after having just earned it on Friday. She refused to participate in class. I talked to her about it and it sucks but she'll get it back. We did come home and Athena and I cooked some eggs so she could try them. I told her I might try and get a couple of chickens but only if she would eat eggs with me. So she has been bugging me non stop just hoping that she will like them because she wants chickens. :) Of course she didn't like eggs and spent an hour trying to convince me we should still get them. We finished up her homework and then she asked me if we could watch Nightmare Before Christmas together. She knows I really like it and I thought that was really cool. She may have been trying to butter me up on the chicken decision. Or maybe because she knew she was in trouble over getting in trouble at karate.

Other than the lack of adult human interaction like is tolerable. How is everybody else doing?

Preface: The fist part of this post was written back in April and I just forgot to post it. LJ restored it from a draft. In that time I've gotten separated from my wife of 10 years and have my daughter 5 days a week. Things are tighter than ever with money and free time and everything but things are looking up. I've got good friends and family and when I get into another relationship I'll do a better job picking a partner and also in being a better partner. I'll make sure any new ladies in my life like Firefly. I should have taken Mikey Mason's advice.

Posted via LiveJournal app for Android.

I've been at best a LJ lurker for a while. I blame the ease and shallowness of facebook. It's just so much work to write more than 1 or 2 sentences these days. :)

So what's everyone been up to? What's the cool new thing? I still love me some Buffy and am getting caught up on Season 6 of Supernatural via Netflix. I also started watching a few new things...which I will force you to read about below. I have some old favorites I still watch like Sons of Anarchy, Fringe, Breaking Bad & The League.

Ringer: I was happy to see Sarah Michelle Gellar back and the show seems interesting but since it's not available On Demand with Cox Cable I probably won't follow it. I just don't have a very good laptop and I don't like to sit at the computer and watch TV.

Terra Nova: Has a good concept but I think that the writers didn't really think about how people would live in a world where dinosaurs roamed the land. They treat it like humans living a jungle where they just have to worry about a lion or something. Big Game animals are dangerous and all but dinosaurs are a whole other level of danger. I don't care how big your rifle is...don't pretend you're gonna stop T-Rex with a gun you can carry. That and they have way too many windows and glass doors in a place with a wall that doesn't seem like it would stop a dinosaur that REALLY wanted in. And what about dinosaurs that fly? Despite that little mini rant the show has some promise. Mainly the whole Terra Nova/Sixer conflict. It's kind of like the whole Others thing in Lost without all the intricate plots.

Walking Dead: I haven't posted about it since it started but I love the show. I love the comic book and they did a great job of capturing the feel of the comic in the show. I just wish they would pick up the pace a bit. It's not like Robert Kirkman doesn't already have 7 years of material to draw from.

Falling Skies: I started to watch but kind of gave up after half of the first season. I just lost interest. Why would aliens want to steal our teenagers? I liked it better when the aliens were just killing everybody and nobody knew why.

So what shows have I missed out on? And is Wincest still popular? I was hoping to ride that one out. ;)

So...no real point to this other than to spark some type of exchange. When did we give up on ruling the world? We had such plans! Or was I the victim of the evil-world conquering equivalent of being left at the K-Mart by your parents?

You know this is serious business...you see how big and bold this font is?!?!

I don't know if I've shared this on LJ yet but this is not something you should miss. The comic is literally one of the best written comics out there right now. I think one of the best things about it is that Frank Darabont (The Shawshank Redemption, The Green Mile) read the comic and decided he wanted to do a TV series for it.